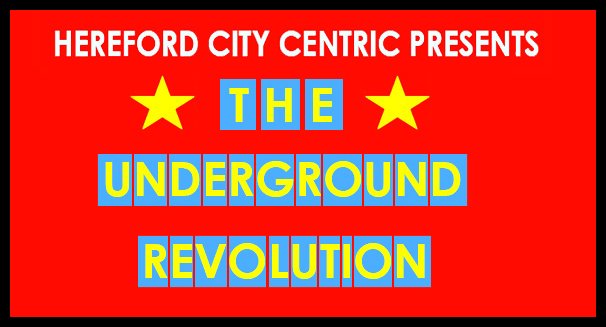 The sleepy, green pastures of Herefordshire seem to be waking up at last and undergoing something of a cultural renaissance. This is evidenced by the explosion of live music and The Underground Revolution can take much of the credit as a scene setter, promoting gigs by an eclectic mix of punk, post-punk, rock, metal and psychedelic acts.

In only a short time, many bands and solo performers have appeared at Underground Revolution shows including punk poet, Attila the Stockbroker (denying that he’d mellowed even on iota since I’d last encountered him) and a variety of local acts with a political undertone such as metal punks - The Delinquents, folk-punks - Freeborn Rising, straight-up punks - The Youth Within and feminist punks - Teddy’s Leg, all of whom are based in and around Herefordshire. Who knew? Until NOW that is.

Set up by Rich Lovell, a Wolverhampton export, and Michelle Cuadra, a Los Angeles native, The Underground Revolution are keen collaborators and The Wild Hare Club is excited to be joining forces for a punky-reggae party, hopefully the first of many such ventures.

At the time of writing (July 2016), The Underground Revolution is planning a series of shows in celebration of ‘40 Years of Punk’ include Subhumans (2nd November) and TV Smith (The Adverts) and On Trial UK who are headlining ‘Crisis of Conscience’ - a Big Issue/Musicians Against Homelessness Charity Punk Festival on 24th September. Future Underground Revolution collaborations to look forward to include events put on with Border This! Records and Stolen Body Records.