Edward Tudor-Pole has the distinction of playing the first ever show hosted under the banner of the Wild Hare Club.  It was, as ever the case with Ed, a dramatic performance, encompassing not only his greatest hit, the much loved Swords of a Thousand Men but also a great Keith Richards cover where it became apparent that he had taken in every nuance of Keef’s on stage performance from having watched numerous Stones shows.

Equally rooted in the rockin’ rhythms of Chuck Berry and the history of ‘this sceptred isle’, there’s nobody else that I know quite like him. He first came to my attention in the film The Great Rock 'n' Roll Swindle, singing Who Killed Bambi? He then went on to score three hits with Ten Pole Tudor before next coming into prominence hosting The Crystal Maze. Since then he’s appeared in numerous films including playing the part of Spike Milligan in The Life and Death of Peter Sellers.

Ed doesn’t really do new-fangled media and doesn’t have a website, but on occasion, if the mood suits him, he will pen a most entertaining letter in a splendid italic script. Ed Tudor Pole is truly a man out of time. 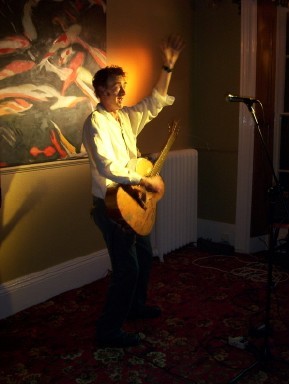