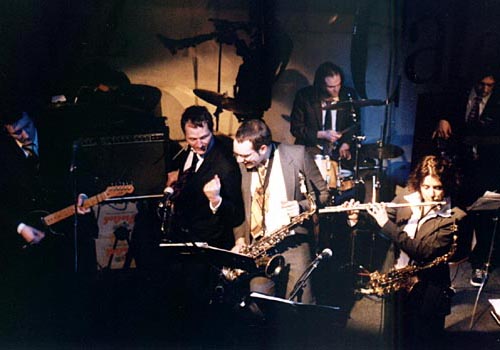 The Wild Hare Club is fully part of this year’s Borderlines and to be hosting a very special show on Saturday 27thFebruary at Lyde Court featuring  The Incredibly Strange Film Band performing a selection of the funkiest film and TV themes cherry-picked from the 1960s to the present day.

The Incredibly Strange Film Band, which formed in 1993 but perform rarely, will be taking to the stage with an impressive eleven-piece line-up including horn section.   Expect to dance from the get-go to a pacey set of tunes from the pens of such great writers and composers as Henry Mancini, John Barry, Laurie Johnson and Quincy Jones.  For added delight, Marilyn Monroe will be making a guest appearance - every bit as glamorous and funny as you’d expect - and DJ Jus Jay will be spinning gems from the box labelled OST.

Not only will your evening be brilliantly sound-tracked but the 17th century tithe barn at Lyde Court provides a magnificent, cinematic setting.  As ever with the Wild Hare Club it’s the audience that make each show an event and for this party, you can add to the glamour by donning red carpet attire and have your portrait taken by the ‘Vanity Hare’ photographer who will be on-hand to snap you in all your finery.