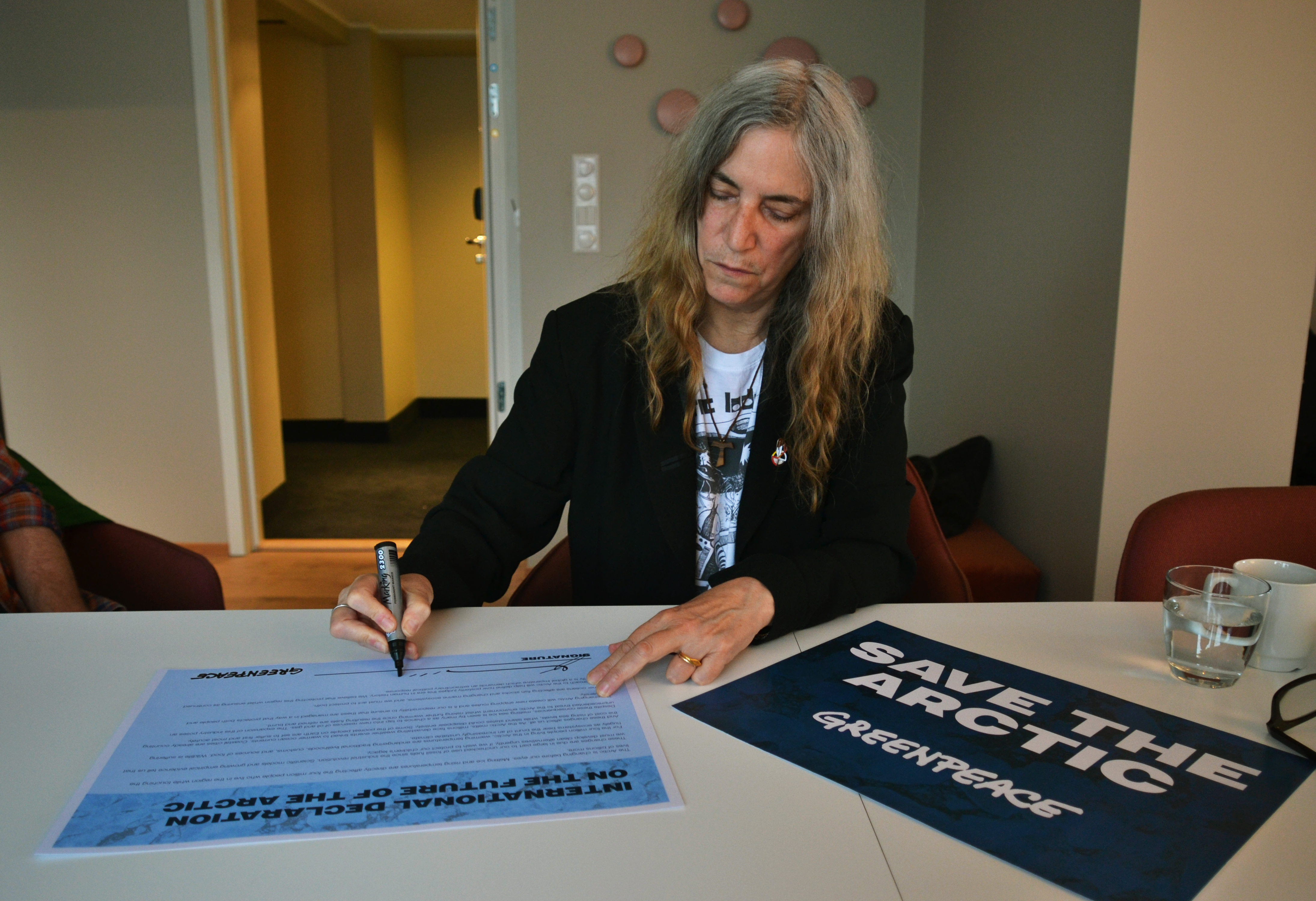 as part of the Save The Arctic campaign. Patti was there to play a relatively low-key show at Bukta Music Festival amid a sea of ordic metal bands. After much emailing and a few calls and being snet round the houses, I was put in touch with her bass player then acting road manager, Tony Shanahan, who told me to meet him and Patti at a hotel where she was doing an exclusive press interview. Tony spotted us in the lobby and introduced us to Patti who invited us up to the suite to listen ot the interview and afterwards we could talk and I would invite her to sign the International Declaration on the Future of the Arctic. The interview was long and wide-ranging and she gave a plug for our work saying that wherever she goes she meets interesting people and while she can't offer her band huge financial rewards, touring will be enriching. Clearly there's something good about this approach because her musicians have been extremely loyal down the years.

So after the interview we got to talk about the campaign, though she didn't want much context for the Save The Arctic campaign. The reason for this I found out later on reading 'M Train ' is that Patti is a member of the rarified Continental Drift Club dedicated to the remembrance and extension of the work of Alfred Wegner and so is expected to keep up with relevant polar and marine research of the Alfred Wegner Institute. Who would have guessed that? She was more interested in the campaign activities and smiled when I told her about Paul Simonon's (Clash bassist)adventure as assistant cook and his scaling of the Leiv Eiriksson rig off Greenland a few years earlier. Then came the ask was she willing to sign the International Declaration on the Future of the Arctic? Of course she was and willing to have photos taken and the story press-released.

I resisted the temptation to ask for a photo with her but here she is doing the deed. She then asked whether she could take the two campaign posters, hastily produced at a local print shop (always useful to locate when campaigning in a new town) to put on the stage at the festival the next day.

The festival was memorable for it's setting, there was a hammer of the Gods vibe, with heavy mists around the mountains across the water. Despite the ruinous cost of a pint, a large part of the audience made its way to the bar between each band enabling me to secure a place at the front of the stage for when Patti's set began. I was pleased to see one of the crew fix the campaign poster to a monitor. It was a festival set of greatest hits but did include some scope fo Patti to improvise and I couldn't believe my ears when she started singing of the ship going to the icy floes...By the end of the gig I was beaming from ear to ear, but the best was left for last. Invited for an encore, Patti strode out onto the stage, ripped the campaign poster off the monitor, held it aloft and began an impromptu speech about the need to protect the environment and for people to use their voice before launching into a powerful and celebratory 'People Have the Power'.

On filing out of the show, I discovered the small woman I'd let in to stand in front of me was a scientist from the Norwegian Institute of Marine Research and so we had a bit of a chat, more friendly than some of my previous conversations with people from that organisation. I have long held Patti Smith in high regard, in fact ever since hurried out of my maths O level exam early so I could buy a copy of her one bona fide hit 'Because the Night' and then borrowing - for much longer than is really polite - a school friend's elder brother's copy of Horses. Over the years, I have seen her perform m any times and she has never disappointed. Best perhaps was a gallp through Horses at the Roundhouse thanks to Catharine Bensonjust after I left Greenpeace for good. What I like best abut Patti Smith is that she has genuinely remained true to the trail which is all we can hope for from those we love and admire. 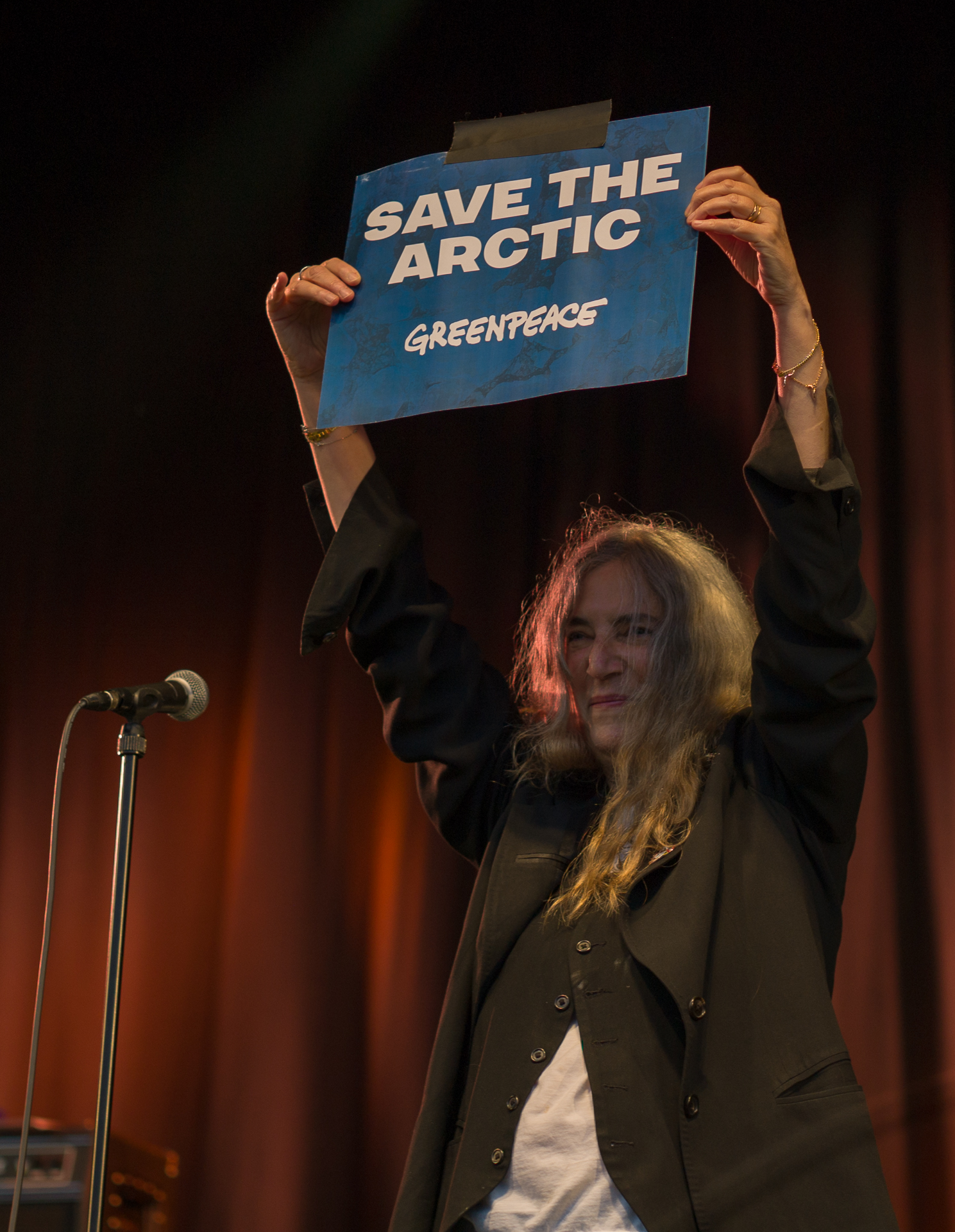