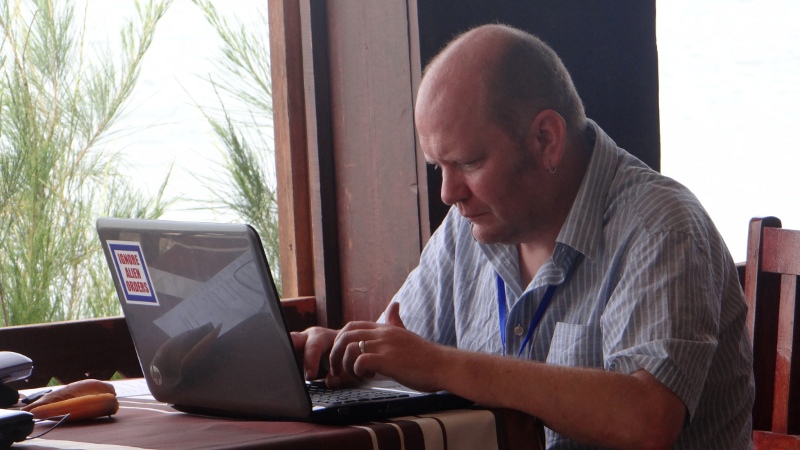 Joe Strummer was on a roll just before his untimely death in 2002.  He and his band, The Mescaleros, had really hit their stride, playing music that perhaps actually deserved to be branded ‘world  music’, a rough mix of influences and musical styles.  A new kind of folk music for the 21st century perhaps.  In their last few live sets the band was playing a new song Dakar Meantime. Sadly, or so I’ve heard, the band laid down the music for the song in the studio, so it could be included on their next album but Strummer never got to record the vocal track.   Consequently the song, which was considered to be one of their best, did not appear on the posthumous Streetcore.  I have never heard Dakar Meantime, only read about it, but know in my bones that had I been at one of those final joyous gigs, I would have been grinning from ear to ear.  I don’t know whether Strummer ever visited Dakar or whether the song was a product of his imagination garnered from the Senegalese music he’d heard and what he’d read or been told.  Whatever, it’s not hard imagining the aging punk rocker enjoying the vibe of this city with all the different musics competing for your attention as you step from taxi to street.  A kora ringtone here, a transistor blasting out some reggae there.  Music is everywhere in Senegal.

Our introduction to live music in Senegal is at the terribly named, but prestigious Dakar restaurant/club, Just 4 U.  Luckily we have been adopted by Khally who has volunteered at Greenpeace’s Dakar office since its inception.  Our guide-cum-guardian angel is a Muslim rasta, his greying dreads usually tucked under a beret.  Not always understanding each other, perseverance and good humour means we now know the basics of each other’s lives.  Khally is one of seven siblings and born in Casamance in the south of Senegal.  At age three he came to Dakar where he was brought up by his grandmother.  His father died when he was 12.  He has a younger brother who is good at computers and lives in the US and although Khally has called him on occasion, the brother doesn’t call back.  From what we can gather Khally does various things to get by – he is somewhat vague here – but they include doing some painting and decorating and has produced batiks for the December festival.  His life, I suspect, has been a struggle and his clear devotion to Greenpeace is due in part because it gives him a real sense of belonging.

As is so often the way with such characters, Khally himself is clearly well known around town, as is evident from all the non-stop handshaking and stopping on every other street corner to exchange greetings.   On telling him about our conversation with Fally Sene Son, a 22 year old sous-verre (reverse glass painting) artist who has a small exhibition of his work at the Institut Francais, Khally immediately says he knows him.  He also adds that if we want to buy a piece of his work we will get a much better rate if we go through him.  Having witnessed his tenacious negotiating for a sept place taxi ride in the Garage Pompier (the central gathering place for fixing a ride out of town in a battered Peugot 504 that can take seven passengers) I have every reason to believe him.

So on Saturday night, we met with Khally at our hotel reception, (he lives only a few hundred meters away), and venture into the night.  Having negotiated a fare, a mere fraction of what we might have managed, we stare out at the busy streets that are the inspiration for Fally’s work.  Fally portrays his district in a particularly vivid fashion, having developed his own unique style of sous-verre.  His technique involves as much collage as painting, as the work incorporates all sorts of found materials.  Peopled by figures cut out from photographs or magazines, his images are more real than any photo, distilling the essence of the city in all its vibrancy and squalor.

On the way to the venue, Khally points out the state hospital, a big private school and the medina market.  Among other things, I am surprised to see that an enormous department stall is named Orca and sports a fine picture of a killer whale painted on one of its walls.

We are among the first to arrive at the club at around 9pm and so secure a table close to the stage. It is a bit too dark to read the menu properly, so Khally uses his mobile as a torch.  We notice thiof on the menu, a fish too expensive now for most Senegalese to buy, and end up opting for chicken and chips.  To begin with, there is quite a large proportion of fellow Europeans and Americans dotted at the tables eating but, as the evening progresses, the club fills up with more Senegalese. Raoul had pointed out to me a few days earlier that Senegalese people eat late, stay up late and rise early.  At Just 4 U, the headline band does not come on before midnight.

The Just 4 U stage is wedged into a corner of the dining area and on the night we visit is cramped with equipment.  However its small size has not stopped the big stars of the Senegal music scene from playing the club.  From Orchestra Baobab to Carlo D, Baaba Maal to Youssou N’Dour (now Senegal’s Minister for Tourism), all the greats have played ,and still play, the club.  The club is also important in helping build the reputations of new artists – a support slot for a big name  providing access to a wide and influential audience. When we arrived we had no idea who was on the bill, but there was never any doubt that we were in for anything other than a special night.

As it turned out for us, it was the first group on that provided the magic.  Kham Kham is a four piece group comprising of a vocalist, a kora player, a guitarist and a percussionist.  The kora is a magical instrument for me, for somehow once the notes are pouring out of a kora, I lose all sense of time.  The young instrumentalist in Kham Kham is as wonderful a player and to these non-expert ears the equal as such acknowledged masters as Toumani  Diabate and Jali Musa Jawara,  who I have been lucky enough to hear at concerts in the UK.  Wearing a baseball cap backwards, Kham Kham’s kora player pulled off the clever trick of sounding as though he were playing three separate stringed instruments simultaneously,   Many of Kham Kham’s songs are built on a simple repeating chord progression provided by the guitarist and over these the kora player adds endlessly beautiful melodic embellishments - cascading scales of notes that seem to go on for ever while he plucks simple bass figure with his other hand.  Add to this a singer with a beautiful yearning voice and a subtle patter of percussion and the ensemble is able to produce music as rich as any orchestra.  ‘They are born to it’, Khally said at one point, nodding sagely.   While much of their repertoire is comparatively gentle, there are occasional crescendos where the kora player is plucking the strings ferociously, hammering out a riff with all the intensity of a rock guitarist, his face scrunched up in concentration and then breaking into a smile when he trades glances with the percussionist.  Later as we are heading home Stas informs me that Kham Kham played for three hours or so and I don’t really believe her, it didn’t seem that long at all.

Once Kham Kham had finished, the musicians that make up Aziouza squeezed onto the stage.  Perched by the drummer is the bassist and in front of him are two keyboard players, one with a Yamaha DX7, the digital synthesizer that was so ubiquitous in the 1980s.  To their right are a percussionist and a wiry young guitarist.  Earlier in the evening the guitarist had joined Kham Kham for one song at the invitation of the group’s percussionist. He had added electric guitar lines that mimicked and complemented those of the kora player.  His tone and sensitivity were immediately evident, occasionally adding a bluesy shading but never riding roughshod over the acoustic instruments.  I’d been impressed and was looking forward to hearing more of the same from his black Stratocaster.  In front of this backline were four microphone stands.

One of the keyboard players struck some fat sounding chords and the band kicked in and played an instrumental to warm up.  It was then that the star of the evening appeared, together with two backing vocalists and a sabar player.   Dressed in a pink, mauve and gold dress and sporting a magnificent  Afro hair do, the singer channelled what can only be described by this fashionista as a ‘way-out Afro-Barbarella’ look, which was finished off with a pair of giant star earrings.

The show that followed, what we saw of it for we left at two a.m. long before the end, was a total contrast in style to the preceding set from Kham Kham.  Aziouza  perform popular songs from all around West Africa in a cabaret fashion with lots of spoken introductions and requests to the audience to join in and sing on the choruses and clap specific rhythms.  The spectacle was magnified when two women appeared in front of the stage dancing with an energy that can only be described as ferocious, somehow both exhilarating and somewhat intimidating.  Each dancer spurred the other on to greater heights and when their showcase spots finished they broke into huge gleaming smiles.

Several songs in and another snazzily dressed woman joins the performers on stage.  She is carrying a microphone, not to sing but to interview the star for a programme which I gather is called ‘Dakar never sleeps’ or words  to that meaning.  Like late night TV presenters worldwide, she spouted a smiling stream of hyperbole by way of introduction and then conducted a short interview with the singer and conducted a flirtatious exchange with the tall and handsome sabar player.  The next number involved inviting members of their audience to come up individually and dance to the rapid rhythms struck out by the sabar player.  Several gamely did, but we were flagging and so paid the bill and picked our way out through the crowded tables and into the warm night.  I hadn’t expected to see a supper-club band but perhaps I should have for Just 4 U is exactly that - a supper club complete with chicken and chips!